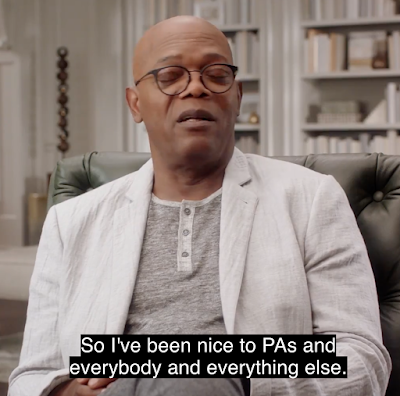 Samuel L. Jackson in his MasterClass

"Susie" struggled and left the court in tears. "I'm the reason we lost." She wasn't. Bella went to her with a big hug. "We win together and we lose together." That team won a lot; connection forged their success.

Coach Roy Williams went to scout a player. The player fouled out...and sprinted to the water cooler to get water for his teammates. He didn't sulk; he used the brief intermission being positive. He got a scholarship to Carolina.

Alan Williams (Teammates Matter) a walk-on at Wake, tried out again before his junior year after a coaching change. When he went to the tryout, his Deacons teammates were there cheering him on. A good teammate earns energy and support for having been a good teammate.

Andrew Smith wasn't an impact freshman at Butler. But he became a player that mattered on a Final Four team. Coach Brad Stevens eulogized Smith, a cancer victim at twenty-five. “He never complained. He was always a great teammate. He tried to help everybody else live a little bit better. And he taught us all how to prepare for our time.”

Brad Stevens discussed former player Ronald Nored. “He could not dribble, pass or shoot...think about that for a second. He played in two national championship games, he played about 25-30 minutes a game. He wasn’t a very good ball-handler. He couldn’t shoot, right? And he struggled to not turn the ball over.” Stevens said he approached Nored’s high school coach. The high school coach told him, “He’s the best leader and giver I’ve ever been around.”

Being a good teammate doesn't stop at the edge of the field. Everson Walls and Ron Springs became the first professional sports teammates to share a kidney. Walls donated the organ to Springs. When I was a Navy doctor, former high school basketball teammate J. Michael Joly performed an ACL reconstruction on me.

Leaders can be great teammates, too. Franklin Roosevelt contracted "polio" (possibly Guillain-Barre Syndrome) in 1921 and struggled with paralysis throughout his life. He traveled to Warm Springs, Georgia in 1924 and later founded a rehabilitation center at Warm Springs. In addition to being a patient, as "Doc Roosevelt" he led patients in exercises and even played water polo with them.

Good teammates show toughness and togetherness. In Toughness, Jay Bilas shares the importance of selfless actions for the good of the team - like communication, sprinting the floor, shot selection, and getting loose balls.

Good teammates are like good spouses. Teammates don't fight with each other; teammates fight for each other.

Lagniappe: Teammates struggle together. "We all want the same thing, a great moment, a great scene, a great movie." - Ron Howard