Fast Five: An Old Man Goes to the Park

Going to the Common to shoot around...and watch. The shooting 'feel' and results 'touch' are perishable skills.

I see a couple of boys playing, probably about thirteen, dribbling the air out of the ball, so I make a few suggestions.

1. Get out of your comfort zone. "Good players score without abusing the dribble." Challenge yourself.

3. The object is scoring, not dribbling. Klay scored 60 points with 11 dribbles and had the ball for 90 seconds.

4. In the NBA, shooting percentage is higher off the catch than off the dribble. "Last season, according to the NBA’s SportVU Player Tracking Statistics, teams shot almost five more attempts per game off the catch than they did off the dribble, which is understandable – catch-and-shoot attempts generated a league-wide average effective field-goal percentage of 51.6%, far superior to that of pull-up attempts, 40.4%." 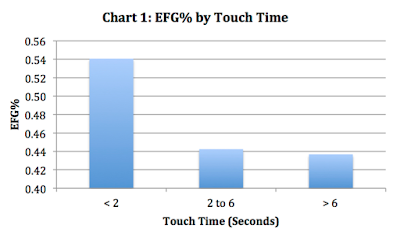 The kids listen, then ignore the old man. What would he know anyway?