What Belongs in Your Summer Shooting Program? 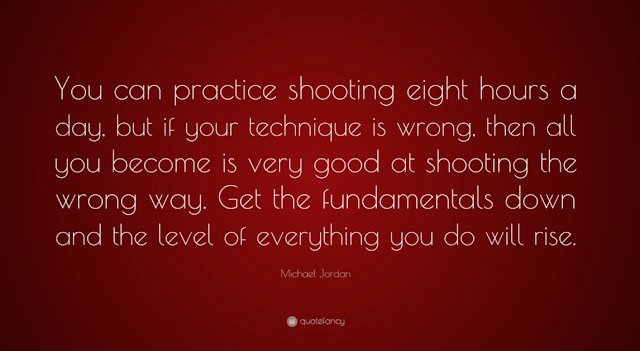 "Shooting is a perishable skill." Use it or lose it. Advising players to practice is like telling students to study. While true, it's not helpful. Learn HOW to practice. Practice with purpose. Become your shooting coach.


"Warm up your shot." Muscle memory doesn't exist. Myelin (like wiring insulation) deposits in brain neural pathways to increase the speed and accuracy of electrical signals to muscles. Practice deposits myelin in the brain. It's MYELIN MEMORY. Don't be a donkey jumping out during a break shooting threes.

Form shoot. Start at the blocks to refine targeting and form. Make a minimum of ten in a row, preferably twenty. Be sure that you have the "open window" (see your target with both eyes). Not everyone agrees.

Use the glass. "The bank is always open." Shoot with a higher percentage using the board. Devote a defined proportion of practice to bank shots. "There are large, identifiable areas on the court where a bank shot can be up to 20 percent more successful than attempting a direct swish." The RED areas are highly preferred for bank shots. 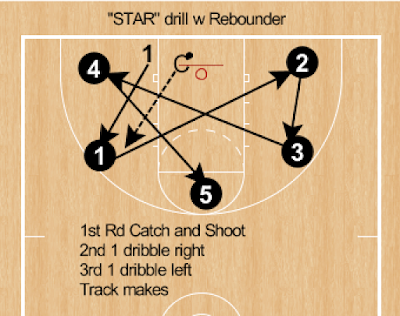 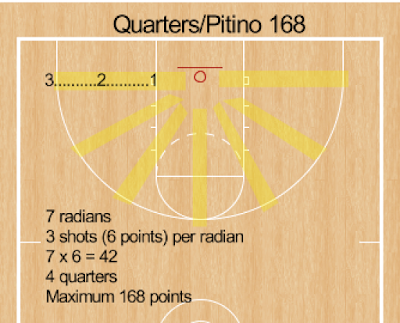 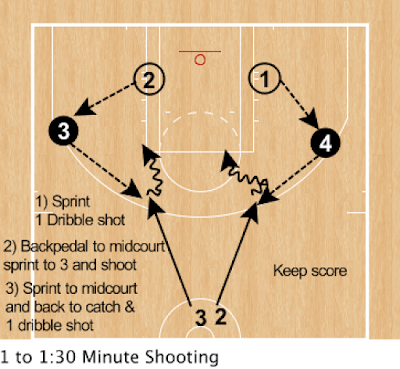 Hexagon. Combination drill shooting off the dribble and the catch, with rebounder. Time element to fatigue and competition...

Find shooting drills that work for you. Create and execute your program relentlessly.

1. Proper warmup means making shots. As Bill Parcells said, "confidence comes from proven success."
2. Better shot selection improves percentage quickest. Dump the bad shots.
3. Practice with a partner/rebounder. Compete.
4. Track everything.
5. NBA shots off-the-catch outperform shooting off-the-dribble. "Last season, according to the NBA’s SportVU Player Tracking Statistics, teams shot almost five more attempts per game off the catch than they did off the dribble, which is understandable – catch-and-shoot attempts generated a league-wide average effective field-goal percentage of 51.6%, far superior to that of pull-up attempts, 40.4%."
6. Vary your practice to include shooting off the catch, off the dribble, off screens (set your cut around the chair or trash can), and a far smaller percentage of pump fake and 'emergency shots' (fallaways, off balance, wrong-footed, rushed end-of-quarter).
7. Eldon Campbell 25. 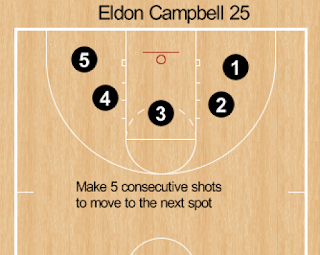 Your goal should ALWAYS be to make 25 in 25 shots.
8. Scoring from inside, mid-range, and perimeter requires practicing each.
9. Never forget free throws. Don't shoot 100 consecutive. Take 4, sprint to the baseline or sideline and take 4 more. Tom Hellen wrote, "teams that can't shoot free throws last as long in the postseason as dogs that chase cars."
10.What are your FOUR WAYS to SCORE? They don't magically appear during the season.
11.Study your form with cellphone video. Evaluate foot position, balance, hip loading, timing, elbow position, follow-through. Form begets function.

"It takes too much time." Choose to invest the time practicing or spend the time sitting on the bench during the season.

"We are what we repeatedly do. Excellence, therefore, is not an act, but a habit." - Aristotle