Brendan Suhr values understanding both sides of the ball in a 2015 Coaching U video. Suhr is respected as a teacher and a wealth of experience with Chuck Daly during the Pistons' championship runs. I'm sharing some highlights as we coaches grow during the offseason, too.

Suhr, "My job is to stimulate you to think."

"Positionless basketball allows you to put your five best players on the floor."

Suhr says a great defensive coach is an expert at offense (know what is hard to defend). Teach concepts.

Key concept: "Can you initiate offense?" This particularly applies to the NBA with a 24-second clock. 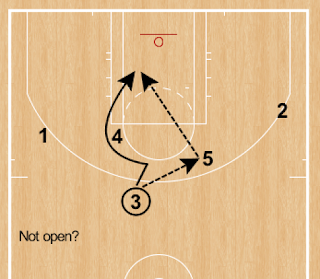 Key concept: Use defense "jumping to the ball" against them with screens.

Alternative horns set, with post entry but goal to get layup for other post. Can get continuation with Screen-the-screener actions. By the time the 4th quarter comes around, multiple options help because the defense anticipates actions they have seen. 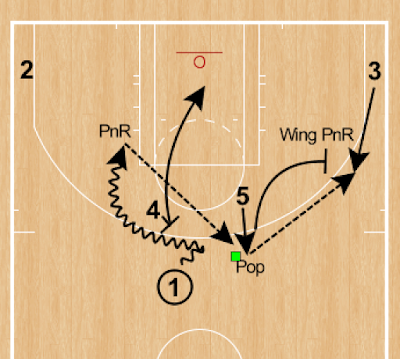 Suhr called this the V-play after Vinnie Johnson ("The Microwave")...to take advantage of hard show/hedge. High PnR option with opposite Pop (Laimbeer). Option that into wing PnR or wing slip with Laimbeer slipping (4 would have cleared to opposite block). Option for 4 to come up and on the wing PnR slip, 3 then gets a second PnR from 4. We have used dribble handoff into a second pick-and-roll at times.

Suhr called this: "Get 2". Key action is the handback with 1 having options for the backscreen lob for 2 or 3 in the corner as the clearout occurred.