The Price of Leadership

Leaders have difficult conversations. Leaders tell the truth, hear the truth, and take the truth. Hard conversations inform role (or lack), discipline, and can inspire anger and envy. They come with the job.

Leaders connect with players and teams, add value, and get buy-in. They get full engagement from teams.

Leaders model Greek influences (ethos-character, logos-reason, pathos-emotion), because players deserve that. "Players don't care what you know until they know you care."

Leadership isn't a popularity contest. And a leadership position isn't achievement. Our actions define us. Players and families will disagree with assigned roles and playing time. As a coach, I recommend that players (not their families) ask coaches directly how they can improve, contribute to the success of the team, and increase their role.

According to twenty-plus NCAA Championship soccer coach Anson Dorrance (UNC), girls sometimes are reluctant leaders. Dorrance says some of his players don't want to be considered "bossy" or worse. That dilemma comes with leadership; leaders own being the hardest workers, biggest sharers, most consistent givers on the team.

There is always a price to pay. The price isn't the same for each of us. Everyone can be a great teammate; not everyone will be a primary leader but everyone can lead better. What price will you pay? 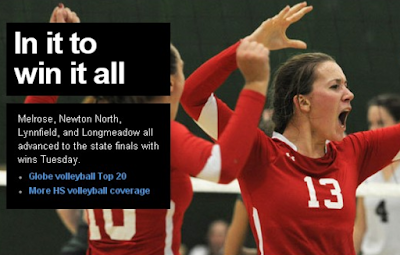 Our local volleyball team has had tremendous success...innumerable league titles, eight sectional championships in sixteen years, and a state championship. Here's one of my favorite images from the 2012 title run. The EYES have it.