Players underestimate the value of playing without the ball. They don't naturally move. How can we teach players to move while maintaining spacing?

The simplest start is one-on-one with a passer. Upon receipt of the pass, the receiver can return the ball to the passer (give-and-go) or attack. This also requires players to 'read' their defender (playing high or low) to teach proper cutting.

We can progress through two-on-two, three-on-three, and four-on-four. When we play two-on-two or three-on-three we limit play to one side of the split (line bisecting the baskets) and initially ban dribbling. 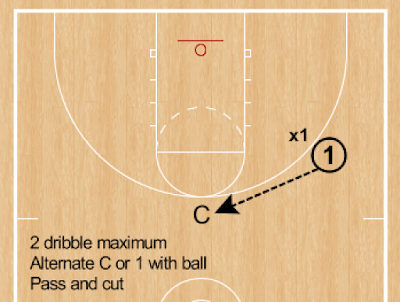 Can substitute C for x1 for coach to play high (read back cut) or low (read front cut) with player needing to set up cut properly. 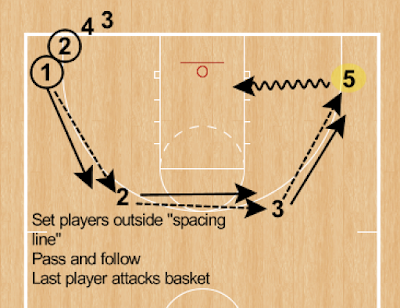 "One more" from Kevin Eastman. I like this as a warmup drill and a pregame drill. Coaches/players can yell "one more" to add energy. 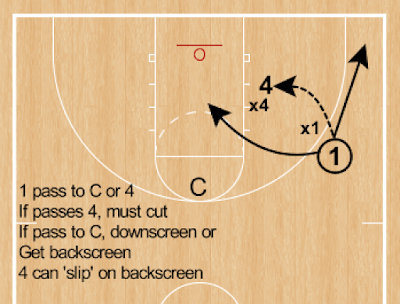 Introduction to "two-man game" with coach as alternative to teach off-ball screening actions. 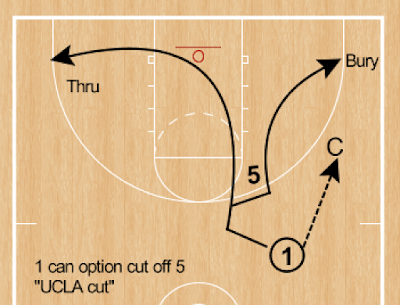 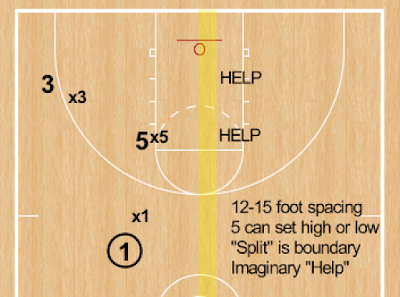 3 on 3 within the 'split'. Add constraint of pass without cut forces substitution out. Unrealistic? Coaching allows "if I ruled the world" thinking.

Shivek drill. Arik Shivek, Israeli national coach. Rotate players through each position:
1) Give and go
2) Pass and cut to the ball for jump shot
3) Pass and cut to open spot, attack the closeout

Four-on-four halfcourt offense, no dribble, a Knight favorite. You don't move, then you never get the ball. Self-explanatory.